skip to main | skip to sidebar

Welcome to the Wyatt Exploration trip for 2010! Our theme is "Poland Between East and West." On May 3rd, 12 UM-Flint students, 3 faculty and I are headed for Krakow, ancient capital of the kingdom of Poland (before the Crown joined with the Grand Duchy of Lithuania and Warsaw seemed a more logical location). We'll be in Krakow May 5 to 17. We have a great itinerary planned and I really excited and curious to see how students enjoy Poland! 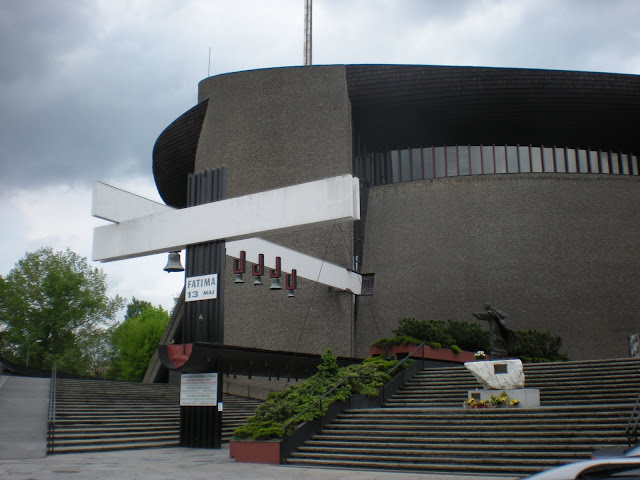 Arka Pana or the Ark of the Lord, the church in Nowa Huta.  Of course, when the socialist state of People's Poland (Polska Rzeczpospolita Ludowa, affectionately known as "PRL") decided to construct Nowa Huta there was no provision for a church.  Small churches and even a Cistercian monastery were in the area where several villages were (taken over by the communist authorities). The workers for the new heavy industry came primarily from the countryside and so they were devout Catholics. The state forbade the construction of new churches and meantime those who lived in Nowa Huta overflowed the little churches left there and heard mass standing in the outdoors.  So a plan emerged to build an addition to one of the churches, and this is what the "addition" turned out to be:  a huge, completely modern church similar in architecture to a church designed in France by Le Corbusier. The negotiations between the church and the government all transpired while Karol Woytyla was archbishop of Krakow. Aside from the architects and other professionals needed, all the construction was done by the Nowa Huta steel workers themselves.  Not surprising to those of us from Flint who know the talents of skilled trades!

Posted by Teddy Robertson at 2:00 PM